Carnival Cruise Line’s Brand Ambassador John Heald has announced that Guy’s Pig & Anchor Smokehouse | Brewhouse will be complimentary on Mardi Gras, and Guy’s Burger Joint will be open for breakfast for the first time.

Heald has been running around the line’s newest and largest ship for the majority of the week, sharing photos and videos on his Facebook page to show passengers what they can expect aboard the shiny new vessel. If you’ve been following along with Carnival Cruise Line’s Mardi Gras news for the past two years, it’s no surprise to you that the ship has several brand-new restaurants and bars that have not been seen on any other Carnival ship before, such as Chibang! and The Brass Magnolia. And in this week’s announcements, Heald revealed that the line has tweaked some of its current offerings as well.

Guy’s Pig & Anchor Smokehouse | Brewhouse is a specialty restaurant and brewery aboard Carnival Horizon and Panorama, created in partnership with celebrity chef Guy Fieri. On Mardi Gras, the venue features a smaller menu than on the other ships, and it will be complimentary. Diners can choose from the Smoker Aces section of the menu, where they can mix and match three meats and three sides to create their own custom meal. Fan-favorites The Pig & Anchor Melt and Maple & Chili Salmon will also be available, as well as daily specials for every day of the week. The menu also includes a kid’s meal section for the first time, as well as desserts like apple cobbler and Mississippi mud pie.

Guy’s Burger Joint is Guy Fieri’s first venue with Carnival Cruise Line, and is arguably the line’s most iconic and popular restaurant. It’s available on every ship in the Carnival fleet. 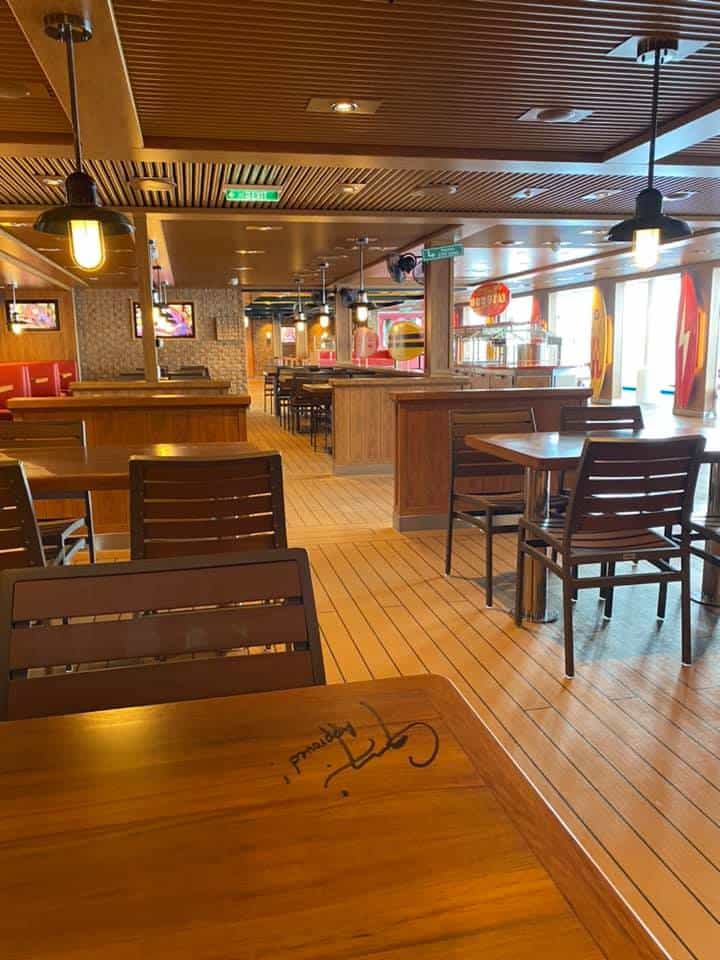 Also this week, John Heald revealed that for the first time ever, the upper deck burger bar will be open for breakfast.

We hope you arrive to the cruise port hungry when taking a cruise aboard Mardi Gras, cuz you’re going to need all the stomach room you can get!